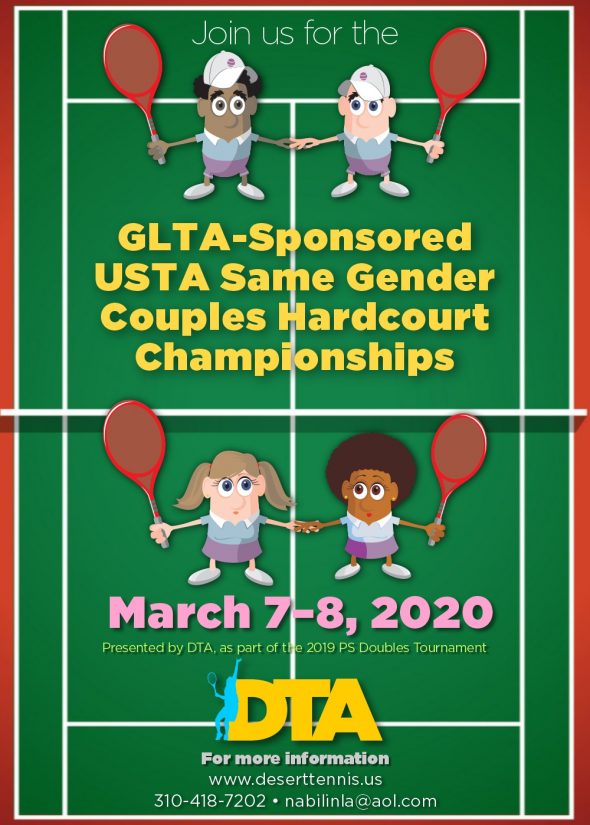 Palm Springs Doubles 2020 is a doubles tournament featuring Same Gender Couples Hard Court Championships, a USTA National Tournament awarding the coveted USTA Gold, Silver and Bronze Awards to the top three finishers in each age division, with mens and womens divisions. Tournament plays March 7 and 8. Combine your desert trip with a visit to the BNP Professional Tournament at the beautiful Indian Wells Tennis Garden. This is one of the top 5 professional tournaments in the world featuring the best male and female players in the world.

Entry deadline, refund deadline Feb 28, 2020. All matches played at Mission Hills Country Club, a world class tennis and golf country club in the beautiful Southern California desert. All matches best of two sets with a match tie break in lieu of a third set when needed.

Entries are not considered finalized until entry fees are paid in full. Draw sizes are limited depending on number of entries and wait lists may be enforced in all divisions. USTA default rules are in effect. USTA code of conduct is in effect. Tennis attire required for the country club, no tank tops, no black soled shoes.

Practice courts are available at Mission Hills Country Club on the Friday prior to tournament start at the rate of $10 per player. Lunch to be provided Saturday and Sunday in lieu of banquet. A player welcome party will be held Friday evening March 6, details to be announced. Play begins 8am Saturday March 7 and continues through finals March 8, 2020. Consolation matches will be allowed for all regular division doubles, first round non-winners. No consolations for USTA Same Gender Doubles.

Players may enter one or two doubles. If two doubles entered, one must be the Same Gender Couples Hard Court Championships. One doubles (reg or same gender couples) $70. 2nd doubles $20. PLAYERS MAY ENTER ONLY ONE REGULAR DOUBLES (OPEN, A, B, C, D) AND ONE SAME GENDER COUPLES DOUBLES IF ENTRY CRITERIA MET.